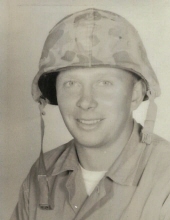 James R. Laru, age 87, of Owen, passed away surrounded by his loving family on Saturday, September 17, 2022 at the Clark County Rehab and Living Center in Owen under the tender care of Compassus Hospice and Palliative Care.

A Funeral Service will be held at 1:00 p.m. on Wednesday, September 21, 2022 at the Maurina-Schilling Funeral Home in Abbotsford. Inurnment will be at a later date in the Mountain View Cemetery in South Range, MI. Pastor Don Bruce will officiate. A Visitation will be held from 12:00 p.m. until time of service Wednesday at the funeral home. Full military rites will conducted by Colby VFW Post # 2227.

Jim was born on September 8, 1935, the son of Andrew A. and Fannie S. (Niemi) Laru in Painesdale, MI. He was a 1953 graduate from Jeffers High School in Painesdale, MI. Jim was a miner for Copper Range in Painesdale, MI before enlisting in the US Marine Corp in 1956 and he was honorably discharged in 1958 at Camp Pendleton, CA. He was united in marriage to the former Sharon Steffes on July 30, 1960 in Cudahy, WI. Jim then worked for Wisconsin Power Company in Milwaukee before moving back to Painesdale to mine. They moved to Toivola, MI where they bought a grocery store and ran it until 1988, when they moved to Owen, that’s when Jim worked for Land O Lakes in Spencer until he retired in 1999.

Jim was a member of the South Range Eagles Club and the Toivola Volunteer Fire Department. He was proud that he designed and built two homes one in Torch Lake, MI and the other in Owen. Jim enjoyed hunting, fishing, wood working, gardening, watching sports especially the Detroit Lions and the Detroit Tigers. He liked spending time at the lake and getting together with family and friends most importantly spending time with the grandchildren.

He is preceded in death by his parents; brother: Richard Laru and brother-in-law: Bill Swan.