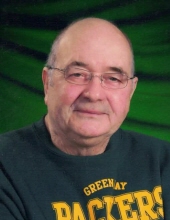 A Mass of Christian Burial will be held at 2:00 p.m. on Friday, September 9, 2022 at St. Thomas Catholic Church in Milan. Father George Graham and Father Joseph Redfern will concelebrate. Interment to follow at St. John’s Catholic Cemetery, Town of Johnson. Family and friends are welcome from 4:00 until 7:00 p.m. on Thursday, September 8 at the Maurina-Schilling Funeral Home in Abbotsford and on Friday from 1:00 p.m. until time of service at the church. Live stream will be available for those unable to attend on the Maurina Schilling Funeral Home Facebook page or after the service anytime on Facebook or the website.

Peter was born on November 1, 1940, the son of Elmerd and Cecilia (Calmes) Schemenauer in Frankfort Township. He started working on the family farm at a young age. Peter met his future wife, Marian Gierl when he was 21 and they were married 5 years later in 1966. Two years later, their son, Craig, was born.

Peter continued working on the farm which he later purchased from his parents, Elmerd and Cecilia, until 2015 when after more than 60 years of farming, he finally entered a long awaited retirement. Peter enjoyed riding his motorcycles and Spyder with his wife, Marian on warm summer days. He also enjoyed finding reasons to use his newest toy, a mini-excavator, which he bought just last year.

Peter will be remembered for his shy but kind smile, his never-ending work ethic, and his (begrudging) (enthusiastic!) willingness to help his son, Craig, with farm projects right up to his unexpected and sudden passing.

He is preceded in death by his parents; two sisters: JoAnn (Bud) Redman and Mary Jane Schemenauer and a sister-in-law, Joyce Schemenauer.