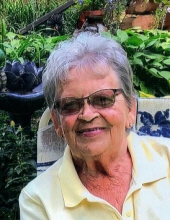 Geraldine R. “Gerrie” Frane, age 87, of Colby, died peacefully on Friday, September 3, 2022 at the Waterford Assisted Living in Colby under the tender care of Heartland Hospice

A Mass of Christian Burial will be held at 11:00 a.m. at St. Mary Help of Christians Catholic Parish in Colby on Friday September 9, 2022. Father Joseph Redfern will officiate. Interment to follow at St. Mary Catholic Cemetery in Colby. Family and friends are welcome for the visitation from 9:30 a.m. until the time of mass at church on Friday.

Gerrie was born on September 6, 1934, the daughter of the late Eino and Elsie (Williams) Walkama in Owen, WI. She attended Park Side Grade School and graduated from Owen High School. On December 27, 1951, Gerrie was united in marriage to Howard M. Frane at Holy Rosary Catholic Church in Owen, WI. Once married she helped Howie farm in Curtiss and worked at Teledyne Post in Owen for many years. Gerrie then purchased and ran a small grocery store called “Gerrie's Mini Mart” in Curtiss until 1984. She was also active in the Curtiss Homemakers Club. Howie and Gerrie then moved to Colby. She was a charter member of the Colby Lioness Club.

She loved fishing, bowling, polka music & dancing, camping, baking, playing cards, jigsaw puzzles and working with crafts. Most of all, Gerrie loved spending time with her family and friends. She was a great wife, mother, grandma and friend.

She is preceded in death by her parents; and two sisters: Mary and Jean.

Gerrie’s family would like to thank Heartland Hospice and the Waterford for their tender care of Gerrie.

In lieu of flowers a memorial will be established at a later date.