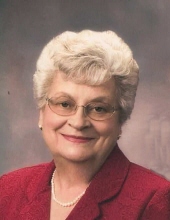 Marcella “Marcie” Bredlau, age 94 of Owen, went to be with the Lord on September 2, 2022 at the Stoney River Memory Care in Marshfield.

A Celebration of Life will be held on September 10, 2022 at the Maurina-Schilling Funeral Home, Owen at 11:00 am. Visitation will be held from 9:00 am until the time of the service at the funeral home.

Marcie was born October 21, 1927, in Dorchester, WI to Dewey & Sophie (Jacobs) Oehler. She was raised on the family farm and received her education at the Draper School in the town of Holton, attending through 8th grade. Marcie worked various jobs before meeting the love of her life Bob Bredlau. They were married May 29, 1948 and were blessed with 72 years together. She was a loving, devoted wife, mother and grandmother. She was known for her hospitality, great cooking and baking, and her sweet personality. She worked as an aid at the Clark County Rehabilitation Center for over 15 years, was a member of United Church of Christ, Church Circle and Eastern Star. She and Bob enjoyed winters in Mesa, AZ, time at their cottage at Lake Holcombe, world traveling, card playing. She treasured the many great memories she made with family and friends.

The family would like to thank all of the staff at Stoney River Memory Care and St. Croix Hospice for helping her on her journey.

Memorials to be established at a later date.