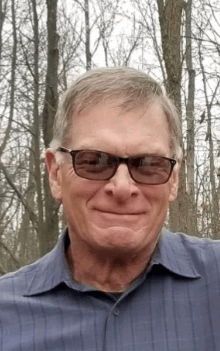 Raymond L. Pratt, JR, 69 of Gilman, died Tuesday, January 11, 2022. Ray passed away surrounded by his loving family in the emergency room at Aspirus Hospital in Medford.

He was born on January 28, 1952 in Massachusetts to the late Geraldine (White) and Raymond Pratt, SR. Ray grew up in Quincy, Mass. After High School he became an auto mechanic. Ray moved to Wisconsin where he met and married the love of his life Edna Patrick on April 6, 2012.

Ray was the first one to lend anybody a helping hand but never asked for anything in return. He was a very kind and gentle man with a smirk on his face. When you saw Ray you saw his favorite traveling companion “furbaby” Abby.

He is preceded in death by his parents, and brother, Ronald.

A memorial visitation will be from 3-7 PM on Monday, January 17, 2022 at the Gilman Funeral Home.