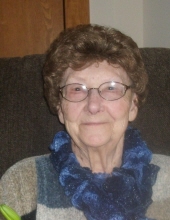 Bernice C. Horacek, age 100, of Abbotsford, passed away on Sunday, January 9, 2022 at the Aspirus Medford Hospital.

A Mass of Christian Burial will be held at 11:00 a.m. on Friday, January 14, 2022 at St. Mary Catholic Church in Colby. Father Michael Hayden will officiate. Interment to follow at the Abbotsford Public Cemetery. Family and friends are welcome on Friday from 10:00 a.m. until time of service at the church. Live stream will be available for those unable to attend on the Maurina Schilling Funeral Home Facebook page or after the service anytime on Facebook or the website. The Maurina-Schilling Funeral Home in Abbotsford is entrusted with the arrangements.

Bernice started working at the age of 15 at the Milan Post Office. After her marriage to Albert, they farmed in the Town of Holton. After selling the farm, they moved to Abbotsford. Bernice also worked at the Colby Nursing Home for 17 years. She also was a drummer in a polka band with her husband and her daughter, Kathy.

She is preceded in death by her parents; her husband; two brothers: Art and Ervin Zahorka and a sister, Anna Haderlein.