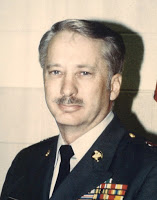 Don was born on April 8, 1935 to Edwin and Anna (Grabo) Albers in Burr Oak, IA. He married Donna L. Meschefske on November 2, 1957 at St. Peter’s Lutheran Church in Dorchester.

Sergeant First Class Albers enlisted in Company A, 724th Engineer Battalion, Medford National Guard Unit on September 28, 1953 and served continuously in the unit for 41 years, 7 months, and 3 days, until his discharge on April 30, 1995. In March 1960 he accepted employment as the full time Administrative Technician. During October 15, 1961 to August 10, 1962 he served with the unit on active duty during the Berlin Crisis at Fort Lewis, Washington. During his Guard Service he had served in assignments as Squad Leader, Tank Commander, Supply Sergeant, and Food Service Sergeant. He is a graduate of many Active Duty and Reserve courses including the Non-Commissioned Officer in Charge Course at the National Guard Professional Education Center, and the Senior NCO Course. He has received many ribbons and awards including the Army Commendation Medal. He attended “REFORGER 86” and “REFORGER 88”, Annual Training at the National Training Center, Fort Irwin, CA in 1990 and in Panama in 1992. Over his years of service he was offered several opportunities to transfer to other assignments, but he chose to remain in Medford.

One of the accomplishments he was proud of was the construction of the Medford National Guard Armory. He was very involved with this project from the very beginning to the dedication on June 10, 1984. The Albers family have been a dedicated “National Guard Family”. His five children considered the Armory their second home as the spent many hours there after school and evenings when Don was working. In March 1992 Don retired from his full time Unit Administration position with over 32 years of service. At that time he accepted a position as Deputy Emergency Government Director for Taylor County.

In lieu of flowers memorial donations in Don’s name may be given to the family for use at a later date.