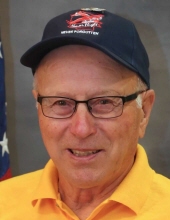 A Private Family Service will be held at 11:00 a.m. on Saturday, January 9, 2021 at Peace United Church of Christ in Dorchester. The Funeral will be live streamed on the funeral home’s Facebook page or after service anytime on Facebook or the website. Rev. Doris Ruben will officiate. A Public Interment to follow at 11:45 a.m. with Military Honors provided by the Dorchester American Legion Post #517 at the Dorchester Memorial Cemetery North. A Celebration of his life will be held at a later date. The Maurina-Schilling Funeral Home in Dorchester is entrusted with the arrangements.

Jerry was born on March 7, 1932, the son of Clarence and Ethel (Scheibe) Rankl in the Town of Holton. He graduated from Abbotsford High School and attended one year at UW-River Falls. Jerry was drafted into the U. S. Army Air Corps served during the Korean War as a paratrooper from 1952-54. On December 21, 1954, he was united in marriage to Arlene Carlson at Peace United Church of Christ in Dorchester.

Jerry was a proud dairy farmer who loved working the soil. He retired from milking cattle in 2001 and crop farmed until 2018. Jerry enjoyed working with animals and loved his pet dogs and cats. He loved hunting, fishing, and time at the cabin. Most importantly, Jerry loved spending time with his children and grandchildren.

Jerry was a lifetime member of Peace United Church of Christ. For many years he was a council member, president of the council and custodian. Jerry was a member and chaplain of the Dorchester American Legion Post #517. He especially enjoyed the Honor Flight to Washington DC and has a plaque in the Korean Memorial at the Highground Memorial Park in Neillsville.

He was preceded in death by his parents and an infant grandson, Logan Kissner.