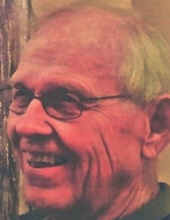 Arlen L. Utke, 84, of Curtiss, passed away at the Clark County Rehab and Living Center in Owen on January 1, 2021.

A private graveside service will be held in the spring at Pine Hill Cemetery in Curtiss. The Maurina-Schilling Funeral Home in Abbotsford is entrusted with the arrangements.

Arlen was born August 13, 1936 in Owen, WI to LeRoy R. and Norma S. (Jacobi) Utke . He attended Woodland and Bee Hive Grade Schools and was a 1954 graduate of Abbotsford High School. He married the former E. Jane (Peissig) Williams on July 18, 1981 at Saint Paul’s Lutheran Church in Curtiss. Arlen and his brother, Harold, started Utke Brothers Building and Supply in Curtiss in the early 1960’s, there Arlen was the architect and a carpenter. He owned and operated the business until his retirement.

Arlen was a charter member of the Curtiss Lions Club, in which he helped to organize. He was a member of Saint Paul’s Lutheran Church and served on the Church Council. The Church Parish Hall kitchen was designed and built by the Utke Brothers. When the church was remodeled Arlen designed and built the pulpit, baptismal font, altar railing and altar table. He designed and drew plans for the new entrance addition on the church that is presently being constructed.

Arlen is preceded in death by his parents and a brother, Harold Utke.