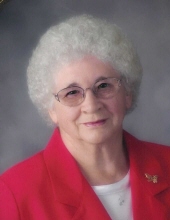 Cecilia L. Schmidt, age 97, of Colby, passed away on Tuesday, October 13, 2020 at the Waterford under the tender care of St. Croix Hospice.

A private family Mass of Christian Burial will be held at 2:00 p.m. on Friday, October 16, 2020 at St. Bernard Catholic Church in Abbotsford. Father Timothy Oudenhoven will officiate. Interment to follow at Dorchester Memorial Cemetery South. Family and friends can watch the service live on the funeral home’s Facebook page or after service anytime on Facebook or the website. Maurina-Schilling Funeral Home of Abbotsford is entrusted with the arrangements.

Cecilia was born on January 29, 1923, the daughter of Anton and Pauline (Gass) Helfert in the Town of Holton. She was united in marriage to Theodore Schmidt on June 3, 1941 at St. Louis Catholic Church in Dorchester. He preceded her in death on March 5, 2001.

Cecilia played the accordion and keyboard and entertained many in nursing homes, at weddings, showers, birthday parties and during Dorchester Days. She also was a housekeeper, enjoyed gardening and canning. Cecilia was a member of St. Bernard PCCW and the Holton Homemakers. The first Saturday in June will always be known as Cecilia Schmidt Day in the Town of Holton. Most importantly, she cherished her family.

Cecilia is survived by five children: Daniel (Dorothy) of Mosinee, Alan (Kathy) of Windsor, Colleen Wegner of Alexandria, MN, William (Jeri) of Abbotsford and Aaron (Ellen) of Thorp; 14 grandchildren; 18 great-grandchildren and one great-great-grandchild. She is further survived by a sister-in-law, Beatrice Helfert of Colby; many nieces, nephews, other relatives and friends.

She was preceded in death by her parents; her husband; five brothers: Joseph, Carl, Anthony, Paul and Nick; two sisters: Agnes Bartnik and Marie Kugel.