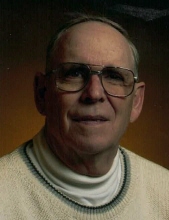 After a long and faithful life on this earth, Orville "Kent" Benjegerdes, 91, passed on Friday, September 4 at Colonial Center in Colby under the care of their staff and St. Croix hospice.

Kent was born on May 15, 1929 in Des Moines, IA to Elsie Irene Benjegerdes. He attended Danville Township primary school and Manly High School. A severe case of the measles forced him to drop out of high school. Later, he proudly earned his GED.

Orville met his future wife and love of his life, Marlene Sutton. Soon after their initial acquaintance and beginning of their courtship, he enlisted in the United States Navy and served as a Seabee during the Korean War. Regular correspondence blossomed into an engagement and then a wedding on December 20, 1952, at the United Methodist Church, Plymouth, IA. Orville and Marlene would celebrate 68 years of marriage this year.

In 1965 Orville and Marlene purchased a farm in Hull township. They continued on the same farm until his retirement in 1995. Then Orville went to work for the dairy he had sold milk to all his Wisconsin farming years; Welcome Dairy. He drove a milk truck and worked in the factory.

Orville belonged to the VFW and held several positions in the Colby United Methodist Church. He enjoyed Sunday drives in the country, trap shooting, arrowhead and rock collecting, and nature.
He was no stranger to working hard his whole life.....most days from sunup to sundown. Whether it was milking cows, plowing snow, making hay, repairing machinery, caring for a sick animal, mowing lawn or planting crops and garden, he made sure it all got done...........taking care of himself last.

A Celebration of life will be held on Tuesday, September 15, at 2 PM at Marina-Schilling Funeral Home in Abbotsford. Family and friends are welcome from 1PM until the time of service Tuesday at the funeral home. Military Honors will provided by the Colby VFW Post #2227. The family respectfully asks that any one who attends follow the Covid -19 guidelines by wearing a mask and practicing good handwashing.