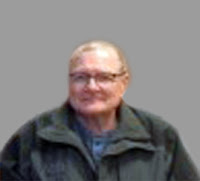 Jeffrey “Jeff” M. Bartelt, 63, of the Township of Greenwood, passed away unexpectedly at Medford Aspirus Hospital on Thursday, June 18, 2020.

Jeff was born on January 24, 1957 to Harold and Frances (Kauss) Bartelt in Medford. He attended Rib Lake Schools. After high school he enlisted in the US Army. He served from 1975 – 1985 and was stationed in Germany from 1978 until 1984. After his service he settled in Milwaukee before returning to Medford. He worked as a cook for Medford High School and then went to work at Northern Kitchens in Rib Lake until his death.

In his spare time he enjoyed gardening. He was a member and president of St. Peter’s Ev. Lutheran Church.

Jeff is survived by his siblings, Terry (Barbara) Bartelt of Oak Creek, Harold (Jayne) Bartelt of Longview, Wash., Edward Bartelt of Cape Coral, Fla., Ronald (Sue) Bartelt of Muskego,  and Karen (Andy) Prado of West Allis. He is further survived by nieces, nephews, and other family and friends.

Jeff is preceded in death by his parents.

In lieu of flowers memorial donations in Jeff’s name may be given to St. Peter’s Ev. Lutheran Church.

Hemer Funeral Service of Medford and Rib Lake has been entrusted with arrangements. Online condolences can be left at www.hemerfuneralservice.com.